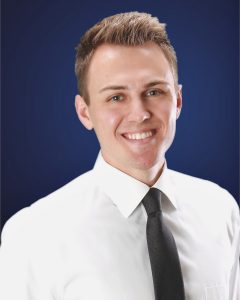 Nicholas Lupo was born and raised in western North Dakota. Growing up and throughout high school, he enjoyed playing sports — football and basketball in particular. He attended North Dakota State University for his undergraduate education before moving to Glendale, Arizona, for a master’s program. He fell in love with Arizona that year but was then accepted into the dental program in Omaha at Creighton University, where he would spend his next four years studying dentistry. After working as an associate for almost a year, Dr. Lupo bought his practice here in Scottsdale, Arizona, where he will set up roots and build his patient family. In his spare time, Dr. Lupo enjoys attending sporting events, hiking, golfing and trying new restaurants with friends and family.

Check back for education later!

Check back for awards later!